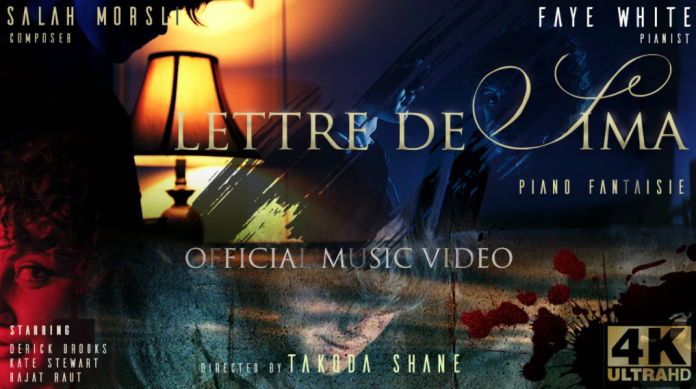 Qualified formally as “Fantaisie on Bb-minor”, the Piano Composition “Lettre de SIMA” is released by the raising Composer “Ahmed Salah Morsli”. Deeply influenced by Classical and Romantic era, the Algerian artist changed over the “Synchronized” performance videos -as well as Scrolling Scores- and branched out into a Cinematographic illustration of his Solo piece. Meeting on the Net the Independent American Filmmaker “Takoda Shane Hulmick”, the International collaboration turned out to be a unique master piece of musical and visual Art!

Salah Morsli … The piece itself is a story!

From the first melodic motif, Lettre de SIMA (Letter from SIMA) prepares the listener for an upcoming Dramatic Evolution. The Harmonious conflict between upper and lower Piano sounds reveals the agitated spirit of the composer and internal necessity to tell something: “It was like a war, I started by my free will, and it led me to its constraining rules!” wrote the Composer few days before the release. The piece consists of four sections; each one is “sub-piece”: “… Avoiding repetitions, Leading to unexpected successions and going beyond regular Forms are to my musical system what are axioms to a Mathematician!”
With a glib musical speech, recovering a littered Spectrum of emotions, the Fantaisie mirrors what “Salah” considers “a Dialectic value of musical Aesthetic”: “I believe always the Supreme Beauty is the outcome of dialectic generation from contradictory Beings, and nothing is better than music to concretize this philosophic concept: Different voices, silence and sound are combined and superposed to lead human ears to state of wonderment […] Lettre de SIMA had been composed for this Hermetic purpose: conducting the listener to undetermined judgment, neither Sad nor Happy, neither still nor agitated, neither Eastern nor Western … but a thing from everything!” mentioned the composer in his literary page “mi-lettre”. The piece ends with a nocturnal emotional movement, a hint that brands “Morsli” Piano compositions like “Mélopée”, “Sérénade à Pétra”, “Dusarès”, “La Sibylline”: “… When I reached the final period, I felt my loyalty to Romanticism invoke me: a nocturnal end would be the best answer to “SIMA” moody Questions!”

Takoda Shane … the director’s genius reflection of the music!

Based in Denver and known for his awarded documentary “Take your Dream”, the multitalented Filmmaker found in Morsli’s composition what he had been waiting for: an emotional instrumental piece that gives the Cinematographer freedom to tell a Story. “For the first listening, I thought of a Victorian Era setting to fit the Film, but after a long reflection, I fell into this choice!”
Distinctively extoled for suitable Color grading, high resolution quality and the “music accentuating” Editing, Takoda says “The Conception was a hard process, Salah put me in a dilemma: “Lettre de SIMA” doesn’t belong to commercial Film music, or to Cinematic Steady Piano music that we can eclipse by Image, it’s a rich music that speaks, that attracts the ears and inducts imagination. A Filmmaker should appeal the Faculty of translating melodies to images, to a consistent story; it’s like I have been asked to make a silent Film for Chopin’s nocturne or Beethoven’s Sonata […] Before writing the Script, I listened to the piece countless times to incur what my friend composer was thinking about, to what he would say with !”.
The two artists spent nights in chat discussing the path for production “As freelancer, distances never challenged me, but this work made the exception. Besides the new cultural Audience that will watch my Film, another subjective challenge comes out: making a Film not only for the musician, but merely for myself […] during our conversation, vocabulary takes a friendly dimension: ‘your music video’ becomes ‘our’, and that’s the challenge itself: rather than his expertise, the Filmmaker is implied by his heart in the work! ”.

Sad Story: the young Cast team got it!

The young actor “Derick Brooks” fits well the “awesome depressed lover” role. Being the central figure of the Film, his face expressions are captured with clever views during his loneliness. While standing alone in room, in perfect Light setting, he invokes his memory to scroll over the Tragedy; how hurtful his unexpected girlfriend departure was! With the promising actress “Kate Stewart”, who is also ballet Dancer, the raising Duo roved viewers through dance, romance, dispute, stabbing and cheating! It’s when “Derick” saw his beloved “Kate” with the third actor “Rajat Raut” that a dramatic end comes out! The Filmmaker decided to leave an open end: had Derick killed Kate?!
No one can answer, only the promised second episode announced by the Composer will unveil the haunting Story!

Faye White: the Canadian component of the International prodigy.

Graduated in Piano Performance from Calgary University, the skilled pianist performed all the recent Morsli piano pieces. For that he said in a TV Report “Faye is a clever Pianist, she understands quickly what the composer wants, and professionally can turn score into perfect execution!”. Considered always as the best Pianist for his style “I made one Sheet, but She gave me four versions of Lettre de SIMA despite of the difficult key of the composition […] Faye has that unique sense of controlling Tempo changes, giving more dynamics for phrases, and perfect left hand putting me comfortable  to give ‘melodicity’ to the Bass! She’s the best ultimate Pianist for my Pianistic mind!”

Dolly White is a real one